Naruto the Movie: Ninja Clash in the Land of Snow 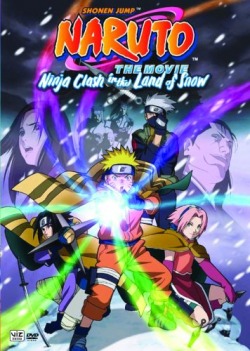 The film opens with Naruto Uzumakii,Sakura Haruno and Sasuke Uchiha watching a film, starring Yuiki Fujikaze, in the local cineplex.Kakashi Hatake has sent them to watch it as preparation for their next mission, guarding the actress who plays Princess Fuun. The actress, as the story progresses, is revealed to be a real princess from the Land Of Snow.Dota Kazehana, the princess' uncle, had ousted Yukie's father in a coup détat. Naruto and his team's mission is to prevent Kazahana from kidnapping the princess whilst she is fulfilling her next role.

Several times Kazahana's henchmen, wearing Chakra armour, attempt to steal the princess. Naruto's team, however, manage to delay the princess from being captured. The antagonist eventually kidnaps the princess amid the defeat of the princesses secret body guards, who reveal themselves in a bid to protect and restore her rightful place as the ruler of the Land of Snow.

Naruto manages to climb aboard the ship carrying the princess in an effort to rescue the actress. He is captured and a mechanism is attached to his body, causing electricity to surge through his body when he uses his Chakra, thus disabling him. Kazahana forces Yukie to hand over a crystal necklace her father gave her when she was child. He believes it to be a key that can unlock the hidden treasure Yukie's father had left behind. Both Yukie and Naruto are placed into a prison cell.

The rest of Team 7 manage to infiltrate the fortress. They go to confront Kazahana but he manages to escape with the crystal necklace. Naruto and Team 7 fall in pursuit but are confronted by Kazahana's henchmen. Naruto goes on while the rest of his team battle the ninja. A furious battle ensues, Team 7 are able to overcome the opposing ninja. Naruto catches up with Kazahana to see the crystal is a fake. Naruto's battle is a serious challenge to him when he attempts to fight the antagonist. Sasuke later joins the battle but is defeated by the enemy's attacks. Sasuke managed to locate a weak spot by using his Chidori and is unable to fight.

Naruto uses his Rasengan in an angered bid to defeat Kazahana, and wins. Yukie, in the end, decides to reclaim her rightful place of royalty and even mentions personally with Team 7 that even in the life of royalty, her career in acting will not cease
1