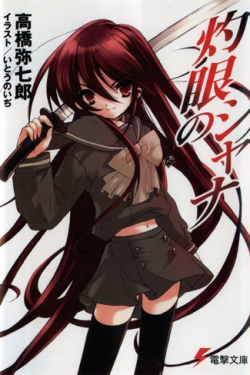 Yuji Sakai, a high school student, expected his very normal life to last forever. However, this expectation is quickly shattered one day while on his way home.

The world suddenly freezes in time, leaving Yuji to watch in horror as blue flames engulf the people around him. Soon a monster resembling a large doll appears and begins sucking the flames into its mouth, until it notices Yuji. Surprised with Yuji's insusceptibility to the time-stop (fuzetsu), it jumps with glee.

Just as the monster prepares to consume Yuji, a sword-wielding girl in black attire with flaming red eyes and hair appears, swiftly and confidently destroys the monster, before noticing Yuji moving freely. The girl calls herself a "Flame Haze" who hunts the "Denizens of the Crimson Realm" and the "Rinne" they send to do their bidding. When Yuji notices a blue flame in his chest, the Flame Haze tells him that the "real" Yuji died some time ago, and that he is a "Torch", a temporary replacement for erased humans. Torches take on the forms of those erased persons, but after a period of time, they will vanish from existence and the memories of the living. Unfazed by his apparent death, Yuji befriends the strange girl and names her "Shana" after her sword. The reason Yuji was able to move in the fuzetsu is that he is not a normal Torch, but instead a special kind called a "Mystes": he has a treasure inside him, known as a "Hougu", a device possessing special abilities of sorts, and an extremely powerful and valuable one at that. The hougu inside Yuji allows him to remain in existence rather than fading away like other torches. Shana resolves to protect Yuji from the Denizens, who would use the treasure to disrupt the balance of the world, and Yuji decides to join Shana in her fight.

Shana's fight is actually a long-standing struggle between the Lords and Denizens of Guze. The Denizens steal Power of Existence, the energy that forms the basis of the world, from living people and utilize it for their own selfish ambitions. Some Lords inhabit humans creating Flame Hazes in an attempt to retain balance by hunting renegades from Guze. Flame Hazes create Torches in place of the consumed to save the world from the disruption of many existences being lost at once, allowing the Torches to gradually burn out over the course of time
1