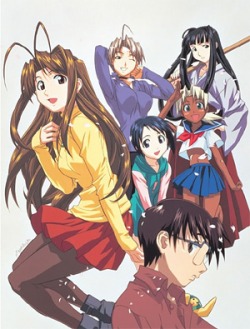 The story is a comedy that takes place in the Kanagawa Prefecture, and centers on Keitaro Urashima and his attempts to fulfill a childhood promise that he made with a girl to enter Tokyo University together. However, he has forgotten the name of the girl he made the promise to and hopes to be accepted into Tokyo University in order to find her. Despite failing the entrance exam twice, he becomes manager of the family-owned girls' dorm Hinata House (日向荘, Hinata Sō, also known as Hinata Apartments) and must balance his new responsibilities with his attempts to pass the university entrance exam. At Hinata House, Keitaro meets Naru Narusegawa, who is also studying to enter Tokyo University. Naru ranked first in the whole of Japan on the practice exams, and Keitaro convinces her to help him study. Keitaro accidentally reads a small section of Naru's diary and as the two grow closer through their studies, Keitaro becomes increasingly convinced that Naru may be the girl he made the promise with. On the second day of the Tokyo University exam, Keitaro asks Naru about the promise and is stunned when she tells him he is mistaken. Despite their studying, and Naru's mock exam results, they both fail the exams. The pair then have an argument and independently run off to Kyoto to clear their heads. While on their trip they settle their differences and meet Mutsumi Otohime, who lives in Okinawa and is also studying for the Tokyo University exams.

After returning from Kyoto, Keitaro and Naru eventually decide to retake the exams. After a while, Mutsumi moves to Tokyo, and the three begin to study together. During this period, Naru becomes convinced that Mutsumi is Keitaro's promised girl, but Mutsumi states that she made a childhood promise with Naru, not Keitaro. During the Tokyo University exams, Keitaro believes he has failed them once again and runs away before finding out his results. After learning of this, Naru chases after him without checking her exam results, and is eventually followed by the rest of the residents of Hinata House who announce that Keitaro and Naru both passed the exams along with Mutsumi. However, at the Tokyo University opening ceremony, Keitaro has an accident and is unable to attend the University for three months. After recovering from his injuries, Keitaro decides to study overseas with Noriyasu Seta. As Keitaro leaves, Naru finally confesses her true feelings to him at the airport and decides to wait for him to return.

When Keitaro returns, he and Naru finally begin to express their feelings for each other. After they deal with new obstacles, Grandma Hina returns to Hinata House and reveals Naru is the girl of Keitaro's promise. Three years later, a wedding ceremony is held at Hinata House for Naru and Keitaro as they finally fulfill their childhood promise to each other.
1