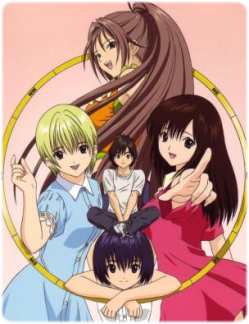 Strawberry 100% chronicles the school years of Junpei Manaka, a high school student and aspiring movie director, and his relationships with the girls that enter his life. At the start of the series, he encounters a mystery girl with strawberry-print panties, who he quickly becomes intrigued with. Hoping to find her, he finds the notebook of Aya Toujou nearby, who turns out to be an ordinary-looking girl. However, he soon discovers that Aya is a gifted writer, and the two become friends. Meanwhile, he believes the mystery girl to be Tsukasa Nishino, the most popular girl in his school. The two soon start a relationship together. However, he eventually realises Tsukasa is not the mystery girl he had been searching for, but chooses to continue their relationship. During his entrance exam for his desired high school, Izumizaka High, he discovers that Aya is in fact the mystery girl.

On his first day, he meets a feisty girl named Satsuki Kitaoji, whom he later discovers to be his classmate. The two gradually become friends and Satsuki eventually falls in love with him. Junpei starts a film club with Aya, Satsuki, a new classmate, the girl-crazed Hiroshi Sotomura, and two of his high school friends. Later Yui Minamito, an old childhood friend, reenters his life, around the same time Tsukasa grows impatient and breaks up with him, although their relationship later develops once more and they become good friends.