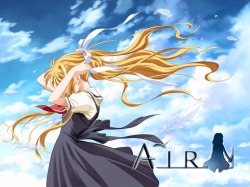 Air's story revolves around three girls whose lives are connected to the same man. In the first story, Dream, Yukito Kunisaki is a showman traveling across Japan, continuing his late mother's search for the "girl in the sky". The story opens on Monday July 17, 2000 when Yukito comes across a small seaside town where the story takes place. On his first day in town, Yukito tries to earn money by putting on a mysterious puppet show where he manipulates a doll magically without strings for a small audience of kids passing by. Yukito is unsuccessful in gaining the children's favor, and the children leave without paying him for his performance. That night, Yukito sleeps on the town's seawall by the beach. Yukito collapses from heat stroke the next day and is taken to a nearby fisherman's guild; after he awakens, they feed him, and give him some very large rice balls to take with him as he is leaving. As he sits on the town's seawall eating one of the rice balls, he notices a young girl beside him who introduces herself as Misuzu Kamio—a sincere yet clumsy girl who is eager to become friends with him. Misuzu persistently attempts to play with him, while Yukito tries to refuse her efforts. He eventually follows her home lured by the chance to eat. After Haruko, Misuzu's aunt and foster mother, is persuaded, it is decided that he will stay with them for the time being.

The next day, Yukito meets girl named Kano Kirishima and a stray dog named Potato; Kano and Misuzu go to the same high school. Later that day, Yukito meets a third girl named Minagi Tohno, Misuzu's classmate, and her friend Michiru. Like Misuzu, both Kano and Minagi have strange personalities connected with mysterious pasts. Before long, a legend of "one thousand summers" begins to unfold where the mysteries of the past are framed primarily by the relationship between Yukito and Misuzu. The cursed "girl in the sky" Yukito has been searching for turns out to be Misuzu. By the time he figures this out, she has already grown to love him and has passed her fifteenth birthday. Once these things have come to pass, the "girl in the sky" is cursed to die. The remainder of this arc is dedicated to Yukito's attempt to save her, trying to effectively break the curse.

The next arc, Summer, reveals events that occurred in the summer of one thousand years before the Dream arc, taking place in the Heian period Kannabi no mikoto, or Kanna, is one of the last winged beings in Air's fictional setting and is held as a prisoner in her own castle. Since she bears wings on her back, she is not permitted to leave the castle walls or see her mother, who is in a similar situation elsewhere. With Ryūya, a member of her samurai guard, and Uraha, a fledgling telekinetic, Kanna escapes and traverses feudal Japan to find her mother. However, the rest of the guard and a sect of Buddhist Monks follow them. After catching up, they place a curse on Kanna where she must endure constant reincarnation and death whenever she finds love; Misuzu is one such reincarnation.

In the last arc, Air, Yukito's final wish to save Misuzu's life is heard. The story starts over from the Dream arc, although it is seen through the view point of a crow Misuzu finds and names Sora. New things are revealed that were not seen following Yukito in the Dream arc. After Misuzu finds Sora and brings him back home, her condition worsens and eventually she forgets even who Haruko is. Misuzu's father shows up during this arc wanting to take Misuzu back to his home, but Haruko pleads with him to grant her more time, and they agree on extending the time for three more days. After the three days pass, Misuzu's father comes back and sees the love between Misuzu and Haruko; he decides to let them stay together. The remainder of this arc has Misuzu and Haruko spending time together like mother and daughter.
Air Episode 1